In my last post, I mentioned that in addition to work and travel, I’ve been up to “other things”. In an earlier post, I talked about wanting to explore my options career-wise given how underpaid I am. So it shouldn’t be a surprise to learn that I’ve been going on job interviews, despite my dislike of them.

I interviewed for three jobs, both before leaving for and after returning from my trip. This is what added to the stress I was already under while planning for / recovering from travel and having a metric ton of stuff to do at work. This is a peak into what I’ve also been dealing with… 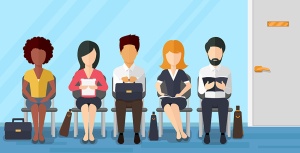 This was a very successful start up on the cusp of an IPO. I applied against my better judgement, only because the field they worked in is a niche interest of mine. Could have been a really cool job. But, alas, it was not a good fit. I did well in the phone interview, but as soon as I walked in the door I knew it likely wouldn’t work out, for the reasons I wrote about in my post about startups. I was determined to give it a chance though, if for no other reason than I’d spent a lot of time putting together the requested presentation.

My assessment of fit was further solidified when I noticed that the group of people meeting with me, while nice enough, were rather similar to one another. Plus, one of the key decision makers took an instant dislike to me, exuding a dismissive air, and never even asking me one question the entire time. As much as I wanted to pack up and walk out, I stuck through the 4.5 hours of individual interviews, a group presentation, and a separate interactive activity.  I left feeling that I wasn’t going to get an offer because they were clearly looking for someone who wasn’t me. Got the rejection email a week later.  No big deal. The feeling was mutual.

The latest in a string of recruiters from this company reached out to me. She lobbied hard for me to interview and work there. This place was a successful former startup, now a medium-sized public company. This place offered great perks and high salary. It would have been an easy 30-40% raise in compensation. That got my attention. So I went through a couple of rounds of phone/video interviews before I was invited to the half-day interview on-site.

I had to prepare a completely different presentation from scratch and that required a lot of work with a few days notice along with interview prep. Think several late nights and entire weekends. It was exhausting. Remember that by this point, I’m also very jet-lagged and busy at work.

After a lengthy commute, I arrive at the place and start doing the presentation and individual interviews. The interviews were challenging, but I was making it through ok. I started to think that I might actually have a shot at getting this job. But then……

After 4 hours of interviewing and being “on”, I went full DERP for the last 20 minutes of talking with the last interviewer of the day. I struggled with one of the questions, started mentally panicking and blanking out, and it all went downhill from there for the remaining questions. Twenty minutes is a looooong time to sit and watch your job prospects with a company implode.

Me, answering questions in the last 20 minutes…

Me, on the way out of the building…

Across the street from the building, I see… 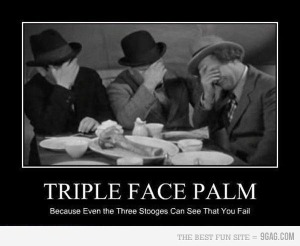 Yeah, I just got the rejection call for that company a few days ago. The chick who had recruited me so hard to work there, barely spent 20 seconds coldly saying, ‘Thanks, but no thanks. Hit the road.’  At least I got rejected by a person and not email this time. And I can at least rest assured that I won’t get bothered by any more of their recruiters.

I guess it was for the best though. That job would have been incredibly stressful and not the best match for my work-style or personality. Being able to get a job doesn’t always mean you’ll be able to keep it, so there is always that risk as well. Maybe my bombing at the end was my own subconscious saving me from what I knew wouldn’t have been a good move.  Too bad though. The money and perks would have been top notch.

This would have been for a position for a US-International company in Europe. Yeah, really! That would have been sooo cool, right?! Well, there was a problem. Compensation and benefits, I learned, would be of the residing country, not the US. With that, my already below market salary would be cut in half because salaries are much lower there, for the field I work in at least. Plus, no 401k or other popular U.S. benefits.

I couldn’t afford to take that kind of hit to my income. I just couldn’t; not even for a 1 or 2 year sojourn. How could I pay my student loans?  I had to withdraw my candidacy. If I were debt free and 10 years younger, I’d be all over going for that job. No, it’s not even about age. If I didn’t have debt and was where I needed to be financially, even at my current age, I could have done it, at least for 1 year.  I. HATE. DEBT!!   Arrgh!! 😦

So yeah… This is what I’ve been dealing with, in addition to everything else.  I’m back where I started; from three job prospects back to zero. It’s a little deflating. I’m not giving up, but I am taking a break from interviewing for a short while. I need things to slow down at work so I’m not so overwhelmed and exhausted. Finding a job is a job itself.

Have you ever snatched defeat from the jaws of victory? What happened?