Thank you to those of you who prodded me and asked if I was going to put up an end-of-year post this year. It’s a bit late, but here it is.

Back in January of 2020, I only named two goals for the year:

VERDICT: PARTIAL PASS. I managed to max out my 401k, Roth IRA, and HSA. I did not take advantage of the ESPP because by the time the purchase window opened, COVID hit and I had other priorities.

TWO. Stack cash! I plan to add at least $20,000 to my existing emergency fund in order to have a total of at least $30k by the end of the year. I still haven’t determined what my fully-funded emergency fund total will be, but I know that at $10k, it’s currently nowhere near where I want it to be. I want to have enough cash that if I lose my job, I won’t have any stress. Instead of panicking about how I’m going to pay my bills, I’m going to be giddy thinking about the sabbatical I’m about to take from work and getting ready to buy plane tickets.

VERDICT: FAIL. I was on track to meet this goal until I moved out. My emergency fund is now $21,200.

“That’s what I’m planning. But then again, everybody has a plan until they get punched in the face. (A pearl of wisdom from the philosopher, Mike Tyson.) We’ll see what 2020 has in store for me.”

Prophetic words to be sure. And boy, did COVID have a mean left hook.

There were a couple of reasons that caused me to move out of the room I was renting, but the more immediate driver of the two was simple – bedbugs. The last roommate to move in brought bedbugs into the house.

The other woman roommate (before she moved out) and I had some reservations about this guy moving in, but there didn’t appear to be any other options available and Landlord liked him because he would only be staying at the house for part of the week. It now appears he was splitting his time between our house and a halfway house. When I said that Landlord didn’t care who he put in the house as long as they paid rent, I was serious.

The Landlord’s decision ended up biting me in the ass, literally. The new roommate’s bedroom and mine were right next to each other. After repeatedly waking up with mysterious bites, I did some research and finally put two and two together. I had to ditch A LOT (~80%) of my stuff, heat-treat the rest and get the hell out of there asap. I was already primed to leave for other reasons, but the bedbugs were the final straw. I showed up at my new apartment with a few boxes and a backpack.

The Fates sent me a loud message it seems. It was time to move on and start living life. Moving expenses, furnishing an apartment from scratch, increased rent, have taken my entire cash flow since then. At the close of 2020, I’m just about caught up now and will be able to start saving money again soon.

Despite the utter shit-show that was 2020, my net worth somehow managed to increase. At the end of 2019, freshly out of debt, my net worth was $207,414. It is now $295,076 – an increase of $87,662. That’s one bright spot. Most of that increase was clearly stock market gains. The stock market is a fickle friend, however, and these days it seems completely divorced from reality.

WHAT’S NEXT FOR ME?

This blog had one main purpose, to chronicle my journey out of debt. That mission has been accomplished.

Assuming I can keep my (stressful) job in 2021, I’m going to build my emergency fund to at least $25K or $30K, then put whatever is left into my Life Fund. I haven’t figured my life out yet, but I can start saving for it anyway. So I’m putting that part on autopilot for a while.

While I plan to leave this blog up for the foreseeable future, I won’t be posting here much unless something major happens. I just have other priorities right now. I can still be reached via “Contact Me” and comments.

Thank you for reading this blog over the years, and offering support and advice. It has been a journey.

Yeah, it all happened pretty quickly. I was prepared to try to ride out the winter there even though I was miserable. Two events triggered my decision to leave; one linked to each roommate. That was it. I was done. I packed up my stuff and got the hell out.

Thanks to all of you who commented on my last post. Ms. Afro Penny and Maria asked me to think about whether enduring my living situation was worth it, and to prioritize my mental health. I did reflect on those words.

I’m now lounging in my own small 1-BR apartment. I considered a renting a studio, but after living in a small bedroom for the last 7 years of my life, that option felt suffocating. I LOVE my new place. The apartment isn’t super swanky or anything, but I think it’s cute. More importantly, it’s clean, quiet, bug-free, and safe.

It is not cheap, but moving to any place was going to be more expensive than what I was paying while living with multiple roommates. I moved to a new town where rent is a bit less expensive, and I got 2 months free rent because the rental market is no longer competitive because of COVID.

This will set me back financially. My savings rate will lower by quite a bit due to the higher rent, and I have been spending money like water over the past couple of months to furnish the place. For me, it’s worth it.

My mental health has boosted. I feel so much better. I love having my own space and having total control over it. I have space to improve my mental and physical health.

I’ve not blogged for a long while. Frankly, with COVID and the elections going full swing for the past couple of months, plus my soul-sucking job, I have not felt energized to post. I haven’t checked on my retirement savings, because it hasn’t been a priority for me. I got an email from “debtor” who reminded me to get back on the keyboard. Thanks for the nudge. 😉

Michelle, congrats on reaching your retirement saving goals for the year. Afro Penny, thanks for keeping it real and sharing the ups and downs of working multiple jobs to pay off debt. It’s a smart move to build up an emergency fund before anything else. You’ll be back to chopping at that debt in no time. My Early Retirement Journey, boy do I understand the stress of a soul-sucking job. I hope the communication channels you’ve set up, help you to work through your grief and challenges. Losing a family member is always so hard. I lost a relative to COVID not long ago. It’s a hard road, but one you can walk.

Now that the elections are over (except for Senate seats in GA), I can start to free up some mental space. I’m hoping things slow down at work over the holidays. But it will be my luck to get someone over my team who has something to prove and wants to make us work at full speed, while other groups get to kick back a little. Sigh.

I hope you’re all able to make the best of a not ideal holiday season this year. 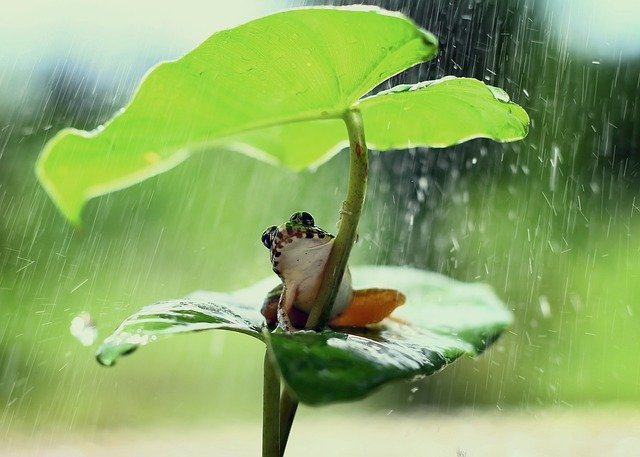 I am this frog right now.

The working-from-home roommate and I are continuing to get on each other’s nerves. On top of everything else, he’s now told me he thinks COVID is a hoax and is not taking it seriously. He spends time getting indoctrinated by weird conspiracy theory and pseudo-scientific videos online. Because he blasts his computer at high volume in the house, I can hear the nonsense he listens to.

Since my last post, he had an out-of-state relative fly in to visit for a couple of days in the house without even telling the other roommate and me, let alone asking if we were ok with it. Not a mask in sight as they spent time in the common areas of the house. (Apparently, his family doesn’t take this seriously either.) I wasn’t comfortable with this and voiced as such.

He got offended and deflected what I had to say as a personal attack on his relative instead of accepting his own insensitivity to the needs of the other people in this house during a pandemic.                    END_OF_DOCUMENT_TOKEN_TO_BE_REPLACED