If you look through the window, even the guy on the next train is like, “Really, chick?!”

The woman in the red shirt is just … over it. I can so empathize right now.  It’s time for another public transit rant.

I’ve written before about public transit. I am, of course, very grateful for the convenience, but I pay more than one price for it.  Here are some things that I deal with… If you also take public transit and recognize these things, feel free to sing along…

If you don’t take public transit, run outside and kiss your car right now. RIGHT NOW, I said!  LoL.

People who are seemingly a) unaware of the existence of headphones or b) under the delusion that everyone on the bus/train car wants to hear the annoying music they feel they need to gift to the world. And it’s always insufferably annoying music. I’ve never had anyone blast music that was actually nice or catchy to listen to. Grinds my gears.  Or the people who watch videos on their phone at full volume. C’mon! Ugh.

Sometimes the music comes with a show, whether you want to see one or not. I understand that transit entertainers are people trying to make an honest buck, but most people on a train car don’t want to see it. You see, watching the show taking place mere inches from your face now socially obligates you to make a donation. You’re trapped. Your only way out is to advert your eyes to your phone or book while popping an aspirin for your oncoming headache.

Most people know this rule, but too many individuals evidently do not. To these people: please, take off your damned backpacks and put them on the floor or hold them down by your legs when in a public transit vehicle. Not only does the backpack take up space that could be filled by another passenger if things get crowded, but they regularly hit people in the immediate vicinity every time you move.

People who won’t make space for others & Crowding

Crowded cars. Period. And people who won’t move further into the car when it’s crowded. Maybe a train broke down and it caused a backup on the line, which quickly causes crowds and overstuffed train cars behind it. Some people refuse to move further into the car causing empty pockets of space in the middle of the car vs. a full body Jenga crush near the doors. Even after the conductor tells them to move in and make space.  Probably the same clueless people wearing huge backpacks… Argh!

Seriously, I’ve almost gagged many, many times. I’ve seen and smelled some horrible, horrible things in the public transit system. I will spare you the details. I’m thiiiis close to buying a mask. Maintenance tries to ‘clean’, but they can’t be everywhere and stench lingers and permeates your clothing.

Oh, and people who sit next to you and haven’t bathed or brushed their teeth for far too long. Omg. Being trapped in the middle of a crowded car for an hour next to someone with horrible BO or bad breath is as terrible as it sounds. Imagine eagerly awaiting each stop so that when the doors open you have hope of getting a faint whiff of fresh air… (On the other hand, maybe this explains the crowded Jenga crush near the doors…) 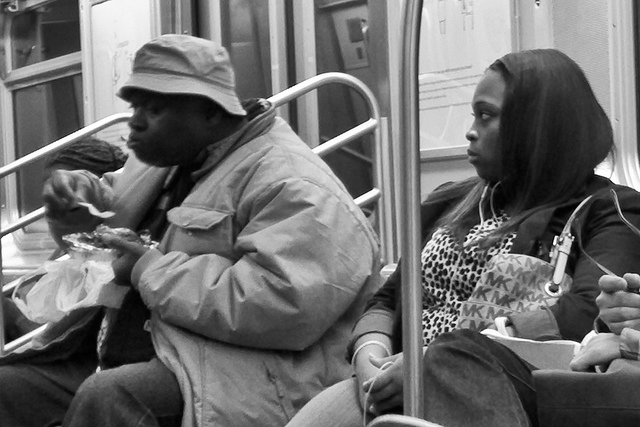 This is just obnoxious. I don’t understand people who do this. I don’t want to see, hear, or smell anything someone is putting into their face when we’re all sitting in an airtight tin can. I don’t care if it’s a stick of bubble gum. Popping and smacking ANYTHING can drive other passengers up a wall, especially after a stressful day at work. Seriously. Never mind the signs and announcements that eating and drinking are prohibited, which clearly go ignored. 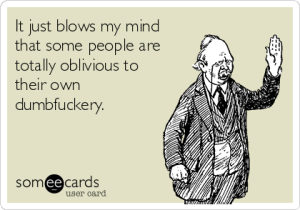 Look that the faces of the fellow passengers in these pics. These pissed off observers are ALL THE WAY over it. And the miscreants either don’t know or don’t care that the people around them are plotting which one of them will grab the murder knife.

So for those of you who have a car, go out and kiss it again. AGAIN, I said!  LoL